Years and years and years ago, I was in Japan, wandering around a used game store. I had just acquired a Japanese ps2 and was looking for some games for it. I came across this 'Melty Blood: Act Cadenza' game, which I remembered hearing about from my Guilty Gear days, back in the US. I bought it, played it, and almost instantly became interested in this surprisingly nonchalant looking character, Aozaki Aoko. That was my first experience with anything Tsukihime.

Fast forward two or so years, during my second trip to Japan, I just so happened to be lucky enough to be in Akihabara when, after so much delay, pic related finally got released: 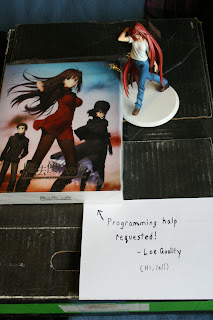 As a dedicated Aoko main and poor saver of money, of course I couldn't just NOT get it; I bought it on the spot, to keep until I had the time to get around to reading it, which I never did. Then, much later (just some weeks ago from now) there was a Mahou Tsukai no Yoru thread on /a/. I posted the above pic asking for tech help to finally start a translation project for it, and lo' and behold, some days later a kindly anon emailed me and provided me the script files to the game.

So, long story short, I am translating Mahou Tsukai no Yoru.

I realize this has already been done (in theory) and there are a number of groups already working on this (in theory), but as I've yet to see any of these projects finish, I'm going to start anyway. I will be translating the game from the beginning, working at whatever pace I can manage. I welcome any and all help I can get on this (it deserves the extra care, after all), but I make no guarantees or estimates on when the translation will be finished, or even when a playable demo patch might exist (that's one of the problems I need help with).

If another group finishes before me, more power to them and I look forward to reading their finished work. If no group does, well that's a hell of a shame, but I hope my translation will be adequate. I believe there are around 200+ script files for the game in total, of which I have completed 2.2 of. So yeah, no completion estimates whatsoever. Thank you all for your support and interest