Though for all intents and purposes, I haven't been active uploading any new works or posts or anything of that matter, I have actually been working on things. As it stands, I have not yet decided on another Manga translation project (beyond the ones that I have listed as projects that I want to do; 'Tokyo Ravens, Tokyo Fox' and 'Wagaya no Oinari-sama') as I have been focusing on completing more of the Swan Eroge projects, HaraPara and Mamankyoushitsu.

In HaraPara, I am working on completing Kukuri and Inori's story routes, which, when done, will leave only Himekoi's Yuuna and Shion's routes, Haramin's Yuka's route (which I'm not too enthused about), and the Harem route to translate before it's all done. Plus perhaps translating and updating the game graphics with english translations, like the wallpaper maker. For Mamankyoushitsu, I am currently working on Honoka's route, to be followed by Mimeri/Emiko/Momo's routes and the Harem Route in whatever order. And the bad end, and graphics translations.

But words are easy; here's a look of how much is done of Kukuri's/Inori's HaraPara route (left), and Honoka's Mamankyoushitsu Route (right)- 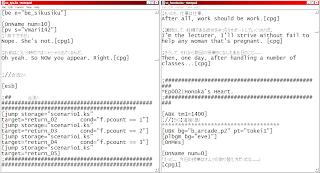 These are the notepad files of the actual scripts I have for each route, so the space between the scroll bar and the end of the Notepad is what still needs to be translated. The scripts for the other routes still needing to be translated are about the same size for either game, so add like three or four of these files of for each game to figure out just how much work still needs to be done before either game is fully translated. I apologize for the slow speed, yet there are a number of other things I would like to focus on while working on these which causes me to not be able to devote all of my time to their translation. Though I thank you all for your continued support and comments; the feedback I get makes me feel people are interested and makes me want to do more. I also thank the guy that donated five dollars. That's pretty awesome.

As for the future, as said I've begun work on HaraKano because it has pretty nice routes and characters, and might be a bit less niche of a game project than HaraPara and Mamankyoushitsu. Unfortunately, as I've said, the game is massive. Loaded into Word, Scenario 1 for HaraKano is 522 pages long. It's script is styled like the two above, so there's a fair bit of those 522 pages that isn't anything I need to translate, but then HaraKano also has Scenario 2, Scenario 3, each seperate character's route, the Harem end, then the Special Modes and their separate character routes, plus graphics translation and everything else. Massive.

In the meantime, I wouldn't mind working on Swanmania's HaraMiko (since I've already translated it once for fun) and some Norn games as they're rather short, along with other, more story focused, less nukige eroge games, such as SaraSaraSasara, Kitsune-sama No Koisuru Omajinai, and Ore-sama no RagnaROCK and stuff. And the aforementioned Wagaya no Oinari sama Manga and lightnovels AND this other cool religious text on Inari in Shinto.

HAVING MORE TIME WOULD BE PRETTY COOL. OH WELL. Maybe next semester.

Anyway, I thank you all for your repeated support of these translation projects (I have noticed Loe Quality Translations suddenly appear on different translation websites, listings, and etc. that I did not even know existed, let alone thought to add myself to), and of course I thank Bonzamonkey for everything he's done in making this even possible. I do not know how to extract or encode KiriKiri scripts, and without him all I could do with any of these games is give a Google doc's transcription of what goes on, which is not nearly as interesting to read.

Though a quick side note: As much as I'm doing right now, if someone were to provide me with the script to Mahou Tsukai No Yoru, I am indeed such a fan of Aoko that I would find a way to work on that translation in addition to everything else. I do not mean to step on the toes of another translator's work (and if any of the things I have listed above are actively being worked on by another group, please, tell me) but the progress on its' translation seems even slower than I am (no offense), and I really would love to try my hand at it if the current group(s?) do not mind. Cause Sensei deserves it.
Posted by LoeQuality at 5:34 PM 2 comments: